The History of Maple Landmark Toys 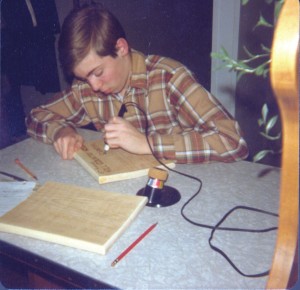 Mike Rainville first came to woodworking as a hobby in the 1970’s while he was in school. Working out of his parents’ basement with scraps from his grandfather’s carpentry projects, he duplicated household items, things like spool holders and cribbage boards. Before long friends and neighbors were asking Mike to make things and by 1979, he started selling wholesale. Local craft fairs also provided income and experience.

At age 15, getting lumber wasn’t just a matter of borrowing a truck but a driver as well. At the time, the best selling items were cribbage and tic-tac-toe games.

After graduating Clarkson University in 1984, Mike went to work constructing a new woodshop of ample size for his now full-time business, now known as Maple Landmark Woodcraft. The choice “Maple Landmark” as the name for the business was a natural extension of the name Mike’s family used for their maple sugaring business and dairy farm, Maple Landmark Homestead. His grandfather, Fletcher Brown made maple syrup for over 65 years and was always available to lend a hand. 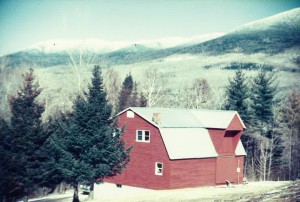 In 1987, Mike acquired the Troll’s Toy Workshop, formerly of Barnet, VT. This addition brought in many products based on the alphabet including letter cars, blocks, and signage letters. The company quickly went from Mike plus some part-time help to several full-time employees.

The product line grew and evolved over the coming years, adding items like trivets, ornaments, and our first name trains. In 1993, after many requests from retailers, the NameTrain concept was spun off into a new line that was compatible with the many wooden track systems available. In 1994, NameTrains were introduced in colors and sales soared.

Growth from these new products had Mike’s building bursting at the seams by late 1994. Being located in the mountains was certainly peaceful but impractical for conducting business. It was decided to move the business into the valley, to Middlebury, our county seat and population center. A new building was built and occupied in 1996. A store was included so people could stop by, see what we do, and buy items to take with them.

Our creative abilities increased in late 1996 when we introduced laser engraving and pad printing to our production processes. The ability to add graphic designs to our products has been central to our product development ever since. All of these products and processes had a hard time fitting in our building and it was enlarged in 1999 to 15,000 square feet.

2007 was a year that changed our business. The numerous recalls that year of imported toys from China, due to lead paint and other hazards, lead people to look for safe alternatives. We received substantial publicity in the national media and sales rapidly shot up. Many more people learned of the need to be aware of toy safety. To meet the requests of many who contacted us, we developed our Schoolhouse Naturals line of maple toys that have no finishes or inks applied to them.

In the following years, we expanded our printing capabilities with direct digital printing and our product line has grown to over 1000 items. We continually update our products based on market demand and the production capabilities we have. 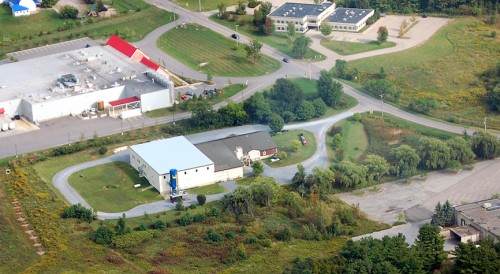 All of this activity once again filled our space and in 2015 we completed another expansion bringing our plant to 28,000 square feet. The addition became our woodshop and the old shop space is being renovated to expand other operations.

Currently, Maple Landmark employs over 40 people and sells products to a couple of thousand gift shops and toy stores throughout the country and abroad. Our product is readily available on the internet as well. We have become the pre-eminent wooden toy manufacturer in the USA.

We were never only about toys and that holds true today. The fastest-growing portion of our business is custom work. We use our capabilities to meet the needs of a couple of hundred companies and institutions. Custom products start with items like you’ll see in the custom section on this site and extend into completely custom-built store displays, component parts, tap handles, and other items that fit our processes.

The next chapter of Maple Landmark began in 2014 when Mike and Jill’s older son Adam joined the company after graduating from Clarkson University. Younger son Andrew is joining in 2017 after graduating Rensselaer Polytechnic Institute. Adam specializes in production management and Andrew will be helping in communications. Both have a short learning curve as they have been involved ever since they were born.