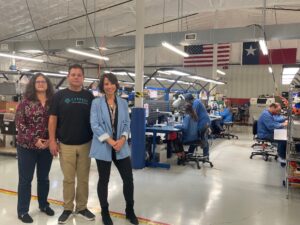 In 1987 Cypress Technologies opened as a family-owned and operated business. They had discovered a way to take tape drives and make them function in extreme and rugged conditions. Once the oil and gas industry had discovered Cypress Technologies and they found themselves flourishing, the question then was “What else can we make in the electronic industry?”. Putting their minds together, they began expanding and building electro-mechanical assemblies, panel builds, and large control systems.

Cypress Technologies had perfected its specialty in building electronics that can withstand harsh conditions and extreme environments. Now, the question was to find other industries that needed the resources Cypress Technologies offered. Industries such as the mining industry and really any industrial type of application.

Here recently, they have taken on some new projects for the medical industry, the electronic and autonomous vehicle industry, and more. These opportunities are very exciting as it is where Cypress Technologies shines brightest in building things with innovation.

To this day, Cypress Technologies is still a family-owned company but has grown to employ anywhere from 50-120 employees depending on the project and the demand. Many of their employees have been with them for 34+ years, as well as many of their clients too.

Cypress Technologies has truly built a unique manufacturing design. Owning a 40,000sf facility gives them a lot of room and a lot of flexibility. Being that they are a contract manufacturer, depending on the project production lines can and will be moved to better accommodate efficiency. Having the ability to produce almost everything under one roof gives the company control, which gives the ability to drive costs down and make sure that the products being produced are top quality.

Cypress Technologies will also license itself based on client needs. Currently, they are pursuing the AS9100 certification which will allow them to market more in the industries of aerospace and defense.

This American manufacturer prides itself on bringing solutions to the table. They employ many veterans and are simply very proud Americans. They purchase from local suppliers and are willing to even produce prototypes for their clients that may have not realized the advantages of sourcing within America showing them that it is possible, and it can be affordable.